Talkie of the Week: The Benny Goodman Story

Plot summary: As a boy, Benny Goodman studied the clarinet and discovered his love for the world of music, a world he took by storm and redefined as an adult. 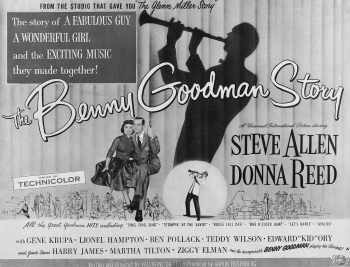 Review: The film industry has always loved a good story that’s rooted in real life: Al Jolson, Tom Edison, Glenn Miller – the dream factory’s fondness for biopics reaches back to its early days when Hollywood itself was still a land.
The Benny Goodman Story is one of those biographical films – not as successful as its predecessor, The Glenn Miller Story from 1954, but every bit as musical and entertaining. Starring Steve Allen as Benny Goodman, the famous clarinetist, the film starts in the musician’s childhood and follows his path from his roots in Chicago to his ultimate success in California and the rest of the United States. Throughout the film, Allen gave a quiet performance of a man whose sentiments became tangible in his music. He was supported by a lovely Donna Reed whose character underwent a believable transition from a true skeptic to a woman who fell in love with Benny Goodman and his revolutionary music.

Although already blessed with two strong, experienced performers, the real excellence of this pictures lies in the performances and appearances of many real, contemporary artists, Ben Pollack and Gene Krupa to only name two. It is their music and enthusiasm that makes this picture special and papers over the cracks of a wildly fictitious story, another biopic tradition Hollywood continued with the production of The Benny Goodman Story. For anyone who can’t help but swing it to Goodman’s rhythm and tunes, this film is a real treat. Fifty-six years after its original release, the movie still has what it takes to attract a music-loving audience of all ages.

The film is available on DVD. You can watch The Benny Goodman Story trailer here.