Talkie of the Week: Disney Series

Plot summary: Mary Poppins is the kind of nanny every child dreams of. She‘s lovely, adventurous and full of magic, or simply supercalifragilisticexpialidocious. 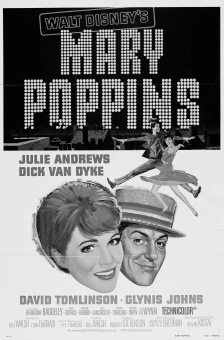 Review: Who does not know her, Mary Poppins, the bewitching nanny played by Julie Andrews? Arriving with the changing wind, she knows how to make a big entrance in the lives of the Banks family at a time when they need her most. The children of the household, Jane and Michael, have made a habit out of swapping personnel. They do not wish to be handled by stiff-lipped elders, they want to explore the world instead. Mary Poppins, upon arrival, seems to be just another dragon in disguise, another grown-up determined to take the fun out of their lives. However, when she slides up the stairs and opens her bag full of wondrous magic, Jane and Michael change their mind. They open their heart to the new nanny, a lady who believes in following the rules as much as bending them. Before she appeared, from heaven or out of thin air, chores and duty killed every ounce of joy in them, but with Mary, even the dullest of tasks turns into an adventure for the Banks offspring and ultimately also for their parents.

Rewarded with an Academy Award for her performance, Julie Andrews breathed life into a character who turned childhood longings into reality. Based on P.L. Travers’ first book, the silver screen version of Mary Poppins was dulcified, her story abridged to fit into 139 minutes of live action entertainment interwoven with musical numbers and animated sequences. Versatile, stage-tested and equipped with a genuinely clear voice, the Ms. Andrews gave her silver screen debut in Disney‘s masterpiece adaptation and proved she was the perfect choice for her first Hollywood alter ego. Although previously trumped by Audrey Hepburn for the screen version of My Fair Lady, Andrews was rewarded with the biggest laurels of industry success and thus extended her career from stage to film. Timeless in quality and style, Mary Poppins has since remained one of Julie Andrews’ most memorable films, a Disney classic children love to revisit as much as adults.

An instant success upon release in 1964, the film was re-released in 1973 and rerun on television on a regular basis. Also made available on home video and DVD, Mary Poppins has managed to stay entertaining and fresh over the duration of five decades. On December 10, 2013, the motion picture has now also been announced to be released on Blu-ray as a 50th Anniversary Edition, another milestone in the history of a film that still enchants my heart and always revives my belief in the power of imagination.