Game summary: Based on the popular game Charades, two groups of celebrity contestants compete against each other to find out who’s faster at miming the titles and sentences contributed by the audience. 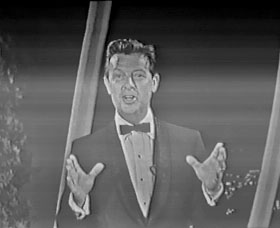 Review: Pantomime Quiz is one of those shows I miss a lot these days: pure entertainment for the entire family. These game shows are great fun to watch at any age and apparently brought a lot of joy to the contestants as well back in the days. Beverly Garland was one of the regular contestants on Pantomime Quiz, Sebastian Cabot and Ross Martin. Always supported by an incoming celebrity guest, the ever-changing teams of contestants did their best to explain as many terms, names or phrases as possible. The faster a contestant managed to show his or her given term without using a single word, the more points their team got. If they didn’t stay under two minutes, no points were added to their account and thus lowered their chances to prevail in the end.

Originally airing on KTLA as early as in 1947, Pantomime Quiz survived a successful twelve non-consecutive season run on four different networks. Presented by Mike Stokey, the show won an Emmy for “Most Popular Television Program” at the first Emmy Awards ceremony. Discontinued on ABC in 1959, the show was revived on CBS in 1962 under a new title, Stump the Stars. Pat Harrington Jr. hosted the re-imagined show until veteran emcee Stokey returned to the format and welcomed celebrity guests such as the cast of the Dick Van Dyke Show and Perry Mason.

Today, selected clips are available online and on DVD to enjoy with your (grand)parents and kids. Complete episodes are a real treat, my personal favorite being an episode from 1963 featuring Raymond Burr, Barbara Hale, William Hopper and William Talman (displayed on the 5oth Anniversary of Perry Mason box set). I always root for each one of them to find the right clues and gestures, no matter how often I watch them play. You can have a look a full sample episode here on youtube and see for yourselves or click the links above to share my joy about the Perry Mason gang and their familiar quips and quirks. But be prepared, if you’re into game shows, Pantomime Quiz or Stump the Stars may awaken your inner Charades Queen (or King) who feels the urge to convert everyone around you to play along.