Plot summary: At Stalag 13, the prisoners of war are not exactly what they seem to be. 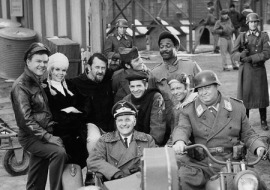 Review: Unlike most TV shows, Hogan’s Heroes is hilarious to some and controversial to others, its overall reception influenced by contemporary criticism. Recognized by Hollywood through several Emmy nominations in the 60s, including three for Outstanding Comedy Series, the show was also named one of the worst TV programs of all time by TV Guide in 2002. As always, it is a matter of perception and depends on your sensitivities towards Nazi prison camps and WWII in general. It is safe to say, however, that the show was not inappropriate. After all, Hogan’s Heroes clearly caricatured Nazis and presented all POWs (prisoners of war) as impeccable heroes. Led by a dashing Colonel Hogan (Bob Crane), the imprisoned (Western) Allies used Stalag 13 as their espionage home base and took every chance to strike against their German enemies. Armed with intellect and a sharp sense of humor, Hogan and his men always prevailed against camp supervisor Colonel Klink, played by German born Werner Klemperer. Like his colleagues John Banner (who portrayed Hauptfeldwebel Schultz) and Robert Clary (aka Free French Air Force Corporal LeBeau), the actor was a European Jew who had escaped the Nazis. The fact that neither one of them had trouble with the unreal setting of Stalag 13 and the silly storylines should placate any critic who feels uncomfortable making fun of war imprisonment.

Available on DVD. Season 4 sample episode, Man in a Box.