Talkie of the Week: Adam’s Rib

Plot summary: Adam and Amanda are happily married until a case divides the two lawyers in court when he has to prosecute his wife’s female client. 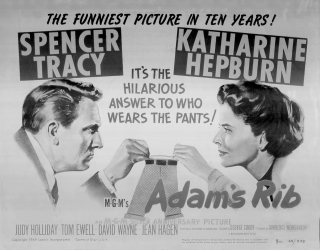 Review: As one of the most successful romantic comedies, Adam’s Rib is a classic gem for its topic of equality between man and women, and for its splendid cast led by Spencer Tracey and Katherine Hepburn. Famous for their on screen chemistry and witty acting, the two stars brought a sparkle of energy to an already hilarious script. Written especially for the two actors as their sixth silver screen collaboration, the film was loosely based on the real life story of William and Dorothy Whitney and presented Judy Holliday in her first big part. Praised for the quality of their script, screenwriters Ruth Gordon and Garson Kanin got nominated for an Academy Award and was added to the National Film Registry in 1992.

As one of those classics that never gets old, Adam’s Rib is a film I simply cannot get enough of. I may be biased towards two of my favorite Hollywood veterans, but Spencer Tracy’s and Katherine Hepburn’s performances are a pure joy to watch. With their endless banter and their natural quality, they added life to a film that was already blessed with a talented director and an excellent score. The case they quarreled about as Amanda and Adam Bonner is a real hoot, especially due to the eventful courtroom scenes. In addition to that, Judy Holliday, Tom Ewell and Jean Hagen did a wonderful job supporting the main stars, never outshining them but strong enough to leave a mark.

Available on DVD today, Adam’s Rib is the perfect treat for an evening at home with friends. It will entertain you and maybe stir a discussion about a topic that never really seems to get old. More than sixty years later, the sense of humor and style may be different, but that’s exactly what makes this film pure gold.