Plot summary: In the year 2062, the Jetson family lives a normal life in Orbit City with their house-robot Rosey and George’s best friend, Astro the dog. 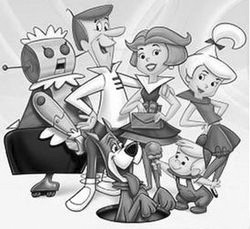 Review: In 2062, life for the Jetsons is full of conveniences: the household is organized by computers and Rosey the Robot, an outdated housekeeper model whose homey attitude and cheeky remarks fit right in with her human family. George is the soft patriarch and Jane his dutiful wife who both love to push buttons to make their lives as easy as possible. Together, they are raising their two children, fifteen-year-old Judy and little Elroy who’s already six-and-a-half. The world they live in is Utopian and futuristic, their apartment elevated above the ground. In their everyday lives, the Jetson children attend school like children from all decades while father George works with his friend RUDI, a Referential Universal Digital Indexer (aka his work computer), whose personality is as human as Rosey’s or Astro’s. Jane Jetson is primarily a housewife whose favorite pastime is shopping as well as delighting her family with new gadgets and fashion. In 75 episodes, they were supported by many recurring characters including George Jetson’s boss Mr. Spacely and an alien called Orbitty.

Produced by William Hanna and Joseph Barbera, The Jetsons were created in color as a Flintstone family in space. Referring to contemporary trends and styles of the early 60s, the show was targeting a grownup audience in its first 24 episodes, a strategy that was changed in the mid 80s when Hanna-Barbera relaunched the program for another two seasons with decent success. Using all the original characters, the sci-fi cartoon family conquered the hearts of many children between 1985 and 87, a hey day for re-imagining TV classics from Leave it to Beaver to Perry Mason.

For anyone who grew up loving Orbit City and the funny mishaps the Jetson family had with their everyday technology, the show is now available on DVD with only the third season not yet announced for release. If you’re like me, you’ll discover your inner child again by watching this lighthearted show from a bygone time when computers did not yet dictate so much of our daily routine. For those who can’t wait to get the complete boxsets, selected episodes are also available on Youtube, including my favorite Rosey the Robot (a character so fondly based on Hazel, another fantastic 60s show and a favorite of mine only recently presented on this blog by yours truly).