Plot summary: In Monticello, life is an endless cycle of personal drama, occasional laughter and crime. 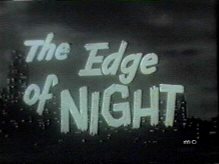 Review: It is the dream of any author to create a character who resonates with a growing audience. As common as this dream may be, it rarely becomes reality. For Erle Stanley Gardner, that dream came true. The character he introduced in 1933 took America by storm: Perry Mason, the attorney who never loses a case. Accompanied by two faithful companions, Della Street and Paul Drake, Gardner’s hero soon tried his cases on paper and screen. First adapted for a movie audience in the 1930s, Perry Mason became truly successful on CBS Radio in 1943. Presented as a daily broadcast, the show was destined to also try its luck on television. Although originally endorsed by Erle Stanley Gardner, the program was ultimately created by Irving Vendig, the mastermind behind Mason’s radio success and renamed The Edge of Night. Following up on twelve years on radio, the television show was presented in daily cliffhanger installments which remained true to their roots of drama and crime. Only loosely based on Gardner’s original concept, The Edge of Night introduced Mike Karr as its central crime-fighting character who was supported by his love interest Sara Lane. Designed as a soap opera, the show was broadcast live on CBS from 1956 until its cancellation in 1975. It was then picked up on ABC for another nine years where it finally ended in 1984 without ever becoming untrue to its open end narrative.

As one of the first two half hour dailies of its genre it may be astonishing to hear that The Edge of Night first drew in a large male audience. At second glance, however, the afternoon time slot as well as the whodunit format are explanation enough. Although first perceived as TV’s daytime Perry Mason, the show soon grew into its own and attracted viewers from all backgrounds and age groups. Set in the fictional town of Monticello, the program did not focus on a single family or institution but rather on the entangled lives of a populace somewhere in the Midwest. John Larkin starred as one of the narrative connectors, an actor then still widely identified as the voice of CBS Radio’s Perry Mason. His Mike Karr was joined by Teal Ames as Sara Lane who met with a tragic and untimely death in 1961. Larkin himself was replaced by Laurence Hugo in 1962 who was then succeeded by Forrest Compton for the remainder of the show’s run. Not uncommon for its genre, The Edge of Night underwent many such character deaths and cast changes in its twenty-eight years on the air, none of which resulted in a fatal decline in ratings. What led to a drop in approval, however, was the unfortunate combination of network policy and Procter & Gambles’ influence on time slot changes.

Today, only a fourth of the original 7,400 episodes are available for syndication. Due to an unfortunate habit of erasing classic recordings, especially the early black and white episodes are a rare treat. For anyone who is familiar with the Perry Mason radio program from the 1940s and 50s, the quality of those few preserved episodes serves as a beautiful continuation of the suspense of once live recorded material. For soap opera fans, the show is also a true classic that deserves to be revisited where possible. Treat yourself to an early episode of The Edge of Night here, Tide commercials, announcer and original score included for the real experience.

In 1943, after having published some twenty odd successful whodunits, Erle Stanley Gardner signed a contract with Procter & Gamble to bring his fictional lawyer and his team to America’s living rooms. Although scarred by his experiences with Hollywood and Warner Bros’ six reluctantly successful screen adaptations, he agreed to broadcast Perry Mason as an afternoon program to entertain his target group and thus promote his books. Despite Gardner’s own deficiencies to turn his narratives into suspenseful scripts, Perry Mason premiered in the fall of 1943 and underwent several revisions until the author finally came to like the radio version of his famous character three years later. Improved by writer Irving Vendig in 1946, Perry Mason was brought to life by several actors, among them Donald Briggs, John Larkin, Sanots 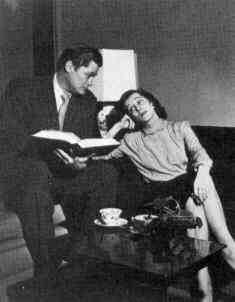 Ortega and Bartlett Robinson. They presented a sophisticated, multifaceted lawyer who was in the habit of defending friends and enjoyed good food. He was supported by an ever-loyal and savvy Della Street, played by Joan Alexander, Jan Miner an Gertrude Warner. Their relationship, like in the books, remained a riddle: close-knit and intimate, yet respectful and professional, they shared a kiss more than once. Paul Drake, the smart-mouthed, brisk detective, was played by Matt Crowley and Charles Webster. Always kept on his toes by Perry’s cases and eager to banter with Della, he was an important ingredient to the slowly blooming success of a soapy yet suspenseful show. Broadcast five days a week in fifteen minute segments, Perry Mason solved his cases with the help of recurring guest characters such as Helen and Jake Jacobson, two news reporters who helped fool suspects or the prosecution more than once. Designed as a suspense program with melodramatic elements, the show lasted twelve consecutive seasons and was finally terminated in 1955. Followed by the still popular Perry Mason TV show (CBS 1957-66, NBC 1985-95) and The Edge of Night (CBS 1956-75, ABC 1975-84), selected episodes of the Perry Mason radio program are now available on The Internet Archive and Old Time Radio. Although incomplete and rather different in quality, the episodes are a wonderful treat for any Perry Mason fan, novice or seasoned, and a great addition to any radio detective collection.