TV classics: aka If You had a Million

Plot summary: Millionaires are happy people or are they? 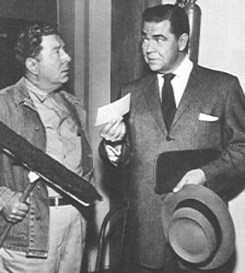 Review: In 1955, anthology programs were as popular on TV as procedurals are today. While most of them featured a different genre on a weekly basis, The Millionaire had a steady concept. John Beresford Tipton, Jr., a man as wealthy as he was generous, made out a check to complete strangers and asked his secretary to deliver them. He gave away one million dollars without any strings attached. Surprised by their sudden fortune, the recipients signed a legal contract to guarantee the anonymity of their unknown sponsor and were then abandoned to their fate. A blessing for some, a curse for others, Tipton’s gift always deeply affected the lives of people who had never dreamed of ever owning so much money.

Popular enough to be parodied on The Jack Benny Program and by Mad Magazine, The Millionaire attracted many guest stars who contributed to the show’s appeal. Although based on a simple idea, the program turned a similar situation into a new story every week and thus kept the original concept interesting for six seasons. Blessed with good scripts and the talents of Marvin Miller as Tipton’s bearer of glad tidings, the show created dramatic, funny and generally entertaining moments with actors such as Dick York, Betty White, Barbara Hale and Bill Williams. Successful for five years on CBS, the show was frequently rerun from 1960 to 1980 and temporarily revived on TV Land in the late 1990s. It is a pity that, today, the program has not yet been made available on DVD. It is a real gem for anyone who loves the Golden Age of television and a cordial invitation to dream of opening the door to Marvin Miller as Michael Anthony.