Plot summary: As a religious anthology series, Crossroads has a look at everyday challenges from a spiritual point of view. 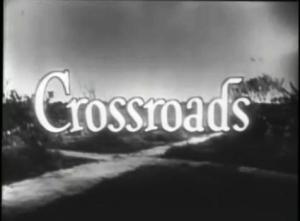 Review: Focusing on the lives of clergymen from numerous denominations, predominantly Christian and Jewish, Crossroads presented a new story and cast each week to entertain and educate an audience from all backgrounds and age groups. Based on actual incidents, each episode offered answers to everyday challenges but also shed light on less common social environments and situations. In Lifeline, for example, broadcast on ABC on May 11, 1956, a young woman (Barbara Hale) seeks the help of Reverend Grumm (Regis Toomey) to salve her conscience and rescue her baby sister from the mob she herself has been working for for years. It’s stories like these that made this show so alluring and the actors who still make it worthwhile today. With selected episodes available on DVD, Crossroads is definitely not a show for agnostics, but it may fill a gap for those who are interested in spirituality and miss a certain sparkle of hope.