Talkie of the Week: Wife vs. Secretary

Plot summary: Van is happily married to Linda until she suspects her husband of having an affair with his gem of a secretary called Whitey. 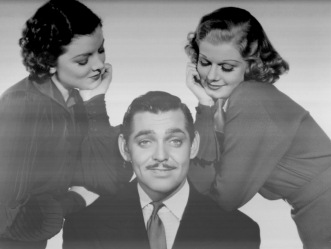 Review: Wife vs. Secretary is a stellar film with a stellar cast. Clark Gable, Jean Harlow, Myrna Loy and James Stewart in one movie – the names alone promise a good eighty-eight minutes of excellent entertainment. And if you enjoy the work and style of only one of these Hollywood legends you won’t be disappointed.

As the leading man of this heavyweight ensemble, Clark Gable carries the basic storyline without any trouble. He’s charming, sympathetic and looks innocently guilty when he faces his celluloid wife and secretary. Jean Harlow is Whitey, Gable’s beautiful office gem who goes beyond her usual sensual poise and charm. She is capable, willing and able, but on a much different note than Loy’s Linda or the audience may assume. Myrna Loy is a wonderful counterpart to Harlow’s peppy character: she’s sophisticated and full of trust until her husband starts telling lies. She’s the perfect loving wife who’s scorned when the gossip seems to match the truth. And her scenes with Jean Harlow spark of the fireworks that go much deeper than any of those contemporary cat fights. The two actresses show class and composure, wittily supported by a subtle script and a beautiful wardrobe. James Stewart adds additional spice to this mix of salt, pepper and chili. He plays Whitey’s boyfriend who’s honest and nice to the bones. He stands for the direct opposite of Van Stanhope’s (Clark Gable) world of big business, fancy dinner parties and a spoiled life. He’s a decent character who offers Whitey a simple but  righteous life.

To sum it up, Wife vs. Secretary is a well-rounded film that never leaves you bored. The storyline is hilarious but doesn’t miss to delve into a moment of poignancy. The dialogs are concise and mildly suggestive, much to the benefit of the spirit and tone of the film. The movie rarely goes over the top but always keeps its characters believable and likable, leaving the audience undecided about who to side with until the very end.

Wife vs. Secretary is a brilliant showcase for the talents of its three leading actors, James Stewart in one of his early roles and an excellent supporting cast. It is the right kind of film to cheer you up on a lazy Sunday afternoon or a perfect addition to a movie marathon of classics led by two of Golden Hollywood’s most memorable women. And although the versus in the title suggests competition, it is the way those two leading ladies work together that makes this movie really great.